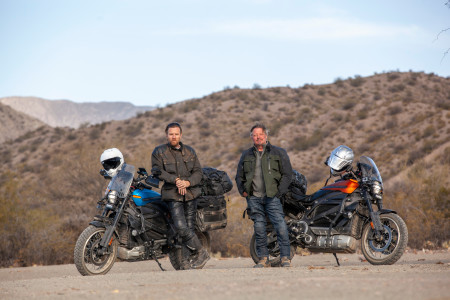 “Long Way Up” to debut globally September 18 on Apple TV+

Apple TV+ today unveiled a first look at “Long Way Up,” an epic new motorcycle series, starring and executive produced by Ewan McGregor and Charley Boorman, which reunites best friends after more than a decade since their last motorbike adventure around the world. The first three episodes of “Long Way Up” will premiere globally on Apple TV+ on Friday, September 18, and new episodes will roll out weekly.

Covering 13,000 miles over 100 days through 16 border crossings and 13 countries, starting from the city of Ushuaia at the tip of South America, Ewan and Charley journey through the glorious and underexposed landscapes of South and Central America in their most challenging expedition to date, using cutting-edge technology on the backs of their electric Harley-Davidson LiveWires in order to contribute to the sustainability of the planet.

The new series will follow Ewan and Charley as they journey through Argentina, Chile, Bolivia, Peru, Ecuador and up through Colombia, Central America and Mexico. Also joining them are their longtime collaborators, directors David Alexanian and Russ Malkin, following them in their electric Rivians.

“Long Way Up” is a new original series that follows Ewan and Charley’s previous adventures in “Long Way Round” and “Long Way Down." The series will join an expanding offering of acclaimed unscripted series and films including the recently announced Fireball,” an original feature documentary directed by acclaimed filmmaker Werner Herzog and Professor Clive Oppenheimer; the soon-to-premiere 2020 Sundance US Grand Jury Prize award-winning documentary, "Boys State”; and the acclaimed, five-time Emmy nominated - including for Outstanding Documentary or Nonfiction Special - “Beastie Boys Story.”

Apple TV+ is available on the Apple TV app on iPhone, iPad, Apple TV, iPod touch, Mac, select Samsung and LG smart TVs, Amazon Fire TV and Roku devices, as well as at tv.apple.com, for $4.99 per month with a seven-day free trial. The Apple TV app will be available on Sony and VIZIO smart TVs later this year. For a limited time, customers who purchase a new iPhone, iPad, Apple TV, Mac or iPod touch can enjoy one year of Apple TV+ for free. This special offer is good for three months after the first activation of the eligible device.1 For more information, please visit apple.com/tvpr.